I like parties. Not that I actually like TO party...that's a different animal, altogether. But I like parties. The planning, the invites, the preparation, the anticipation. I'm bossy. And organized. And creative. And these are the reasons why you would want me to take over your event.
Oh. That and the champagne. Don't forget the champagne. See, when you let the bossy, creative and organized girl handle your party...you get to drink more champagne. And how can you beat that? 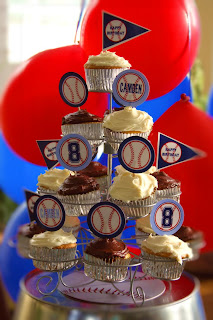 When I first heard I was having a boy I was pissed. No lie. I know you're supposed to not care - "as long as it's healthy" blah blah blah...but I did. I was ready to write my congressman. Call the Better Business Bureau or something. Not much I could do as it turns out.
So, instead - I accepted it and just told everyone I was going to dress our son in dresses. (For the record, he's 5 and has yet to don a single frilly frock.)
And a beautiful thing happened...
I started to realize just how wonderful little boys were. They were crazy. And hilarious. Much less expensive than little girls. And if you don't know already - they LOVE their mommys.
So, as a convert to the joys of mothering little boys I have grown to love dirty trucks, bugs, spiderman costumes and sweet things like baseball themed parties.
I just had the opportunity to organize a baseball themed party for Camden who just turned 8. The party was at an awesome place: Sandlot Sports (baseball/softball facility) with batting cages and a private party room - you have to check them out. The staff was extremely helpful and I can't think of a cooler place for an 8 year old's party! Not to mention this particular 8 year old is especially deserving of such a party. I can only hope that one day my own little monster is as well behaved and sweet as the birthday boy.
Happy Birthday Camden!
Posted by Romp Events at 2:52 PM 1 comment:

Romp Events
Romp Events is a mother/daughter team just dying to handle your floral and coordination needs for your next event! We believe everyone deserves a beautiful party and we hope to help you realize that, with humor, creativity and style.